Facts about Bosnia and Herzegovina

Bosnia and Herzegovina is the heart shaped land that lies in the heart of southeast Europe. It is here that eastern and western civilizations met, sometimes clashed, but more often enriched and reinforced each other throughout its long and fascinating history.

Tourism in Bosnia and Herzegovina is a fast-growing sector making up an important part in the economy of the country. The tourist business environment is constantly developing with an increasingly active tourism promotional system.

Bosnia and Herzegovina has been a top performer in recent years in terms of tourism development; tourist arrivals have grown by an average of 24% annually from 1995 to 2000. The European region’s solid growth in arrivals in 2007 was due in significant part to Southern and Mediterranean Europe’s strong performance (+7%). In particular, Bosnia and Herzegovina were among the stronger players with a growth of 20%. In 2013, the World Economic Forum reported in its Travel and Tourism Competitiveness Report that Bosnia and Herzegovina was the world’s eighth friendliest nation towards tourists. According to an estimate of the World Tourism Organization, Bosnia and Herzegovina will have the third highest tourism growth rate in the world between 1995 and 2020.

The travel guide series, Lonely Planet, has named Sarajevo as the 43rd best city in the world, and in December 2009 listed Sarajevo as one of the top ten cities to visit in 2010.With its #43 spot Sarajevo has come ahead of Dubrovnik, #59, Ljubljana at #84, Bled at #90, Zagreb at #125 and Belgrade at #143, making Sarajevo the best ranking city on the Balkan peninsula behind Athens, Greece.

Tourism in Sarajevo is chiefly focused on historical, religious, and cultural aspects. In recent years investments has made it a popular shopping city as well, with a respectable offer in retail shopping. It hosted the 1984 Winter Olympics, which, at the time, were the largest Winter Games ever (in terms of athletes and media). The country is regaining its reputation as an excellent ski destination with its Olympic mountains such as Bjelašnica, Igman and Jahorina.

There are many fascinating destinations throughout Bosnia and Herzegovina for every type of tourist. In BiH, one gets the best of both worlds. Here, the most interesting and attractive sites are a wonderful mix of this tiny country’s cultural and natural heritage. It is almost impossible to separate them, for it is from this pristine nature that its cultures and traditions evolved.

Jahorina is a mountain in Bosnia and Herzegovina, located near Pale in the Dinaric Alps. It borders Mount Trebević, another Olympic mountain. Jahorina’s highest peak, Ogorjelica, has a summit elevation of 1,916 metres (6,286 ft), making it the second-highest of Sarajevo’s mountains, after Bjelašnica at 2,067 m (6,781 ft).Mount Jahorina hosted the women’s alpine skiing events of the 1984 Winter Olympics. Jahorina is located 15 km (9.3 mi) from Pale and 30 km (19 mi) from Sarajevo. The international airport in Sarajevo is located 33 km (21 mi) from Jahorina, connected with the ski resort by a new motorwa. Jahorina Olympic Ski Resort is the biggest and most popular ski resort in Bosnia and Herzegovina and offers a variety of outdoor sports and activities. It is primarily a destination for alpine skiing, snowboarding, hiking, and sledding, with over 40 km (25 mi) of ski slopes and modern facilities. The average snow depth on ski runs during February is 106 cm (42 in) (ten-year average).The Jahorina ski lift system was upgraded in 2012 and 2013 with new Leitner chairlifts. Together with a gondola lift (under construction), Jahorina has one of the most modern lift systems in the region. An 8-passenger gondola will connect the town of Pale and the ski resort, and open up 15 km (9 mi) of new ski runs.

Mount Bjelasnica is in the central part of Bosnia and Herzegovina, situated South-West, only 25 km from Sarajevo. Beside is Mount Igman on which most of the Alpine and Nordic disciplines and jumps of the XIV Olympic Games were held. 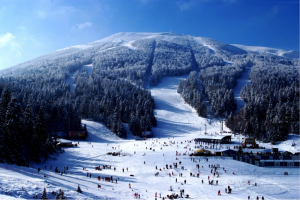 Vlašić is a mountain in the very center of Bosnia and Herzegovina. Its highest peak is Paljenik with an elevation of 1,943 m. It is famous for its pastures, cattle-breeding and cheese. It is closest to the town of Travnik, which it overlooks. The mountain is a major center for winter tourism due to its excellent accommodation for skiing, snowboarding and other winter sports. It is also a popular destination for summer and eco tourism with many hiking trails and undisturbed wilderness areas. 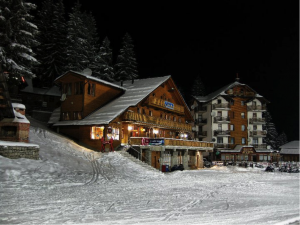